The whole of Japan is a pure invention,” said Oscar Wilde in 1891, ‘… simply a mode of style, an exquisite fancy of art.’ In the last half of the 19th century, a craze for ‘all things Japanese’ became the most influential trend in Western design: the story of Imari porcelain is very much a tale of East and West.

Until the 1850s, Japan was closed to the West, excepting a limited trade with the Dutch East India Company (the only permitted Western trading power) from the tiny man-made island of Dejima in Nagasaki harbour. Apart from a handful of Dutch traders, the authorities forbade Westerners from putting foot on Japanese soil.

The birth of Japanese Imari ware matched the decline of the Chinese Ming Dynasty. In 1674, Ming forces destroyed the larger porcelain kilns at Jingdezhen, China; later revived and reconstructed by the Qing Dynasty in the mid-1680s. But to fill the vacuum caused by the decline in the export of Chinese porcelain, Japanese potters (encouraged by Western importers) began to copy Chinese wares in the area around Arita (in the former Hizen Province, northwestern Kyushu). The porcelain developed into a distinctive style, known in the West as ‘Imari’- named after the port from which potters first shipped their wares before their final journey to the West from Nagasaki. Typically, Imari ware has a palette of dark underglaze blue, iron-red and gold. It can also include green, brown, yellow and sometimes turquoise.

Exports of Imari to Europe trailed off in the mid-18th century following China’s resumed export to Europe: Imari was more expensive to manufacture because of higher labour costs. That said, the Imari ‘look’ was so popular with the West that the Chinese copied it in a style known as ‘Chinese Imari’. At the same time, European kilns (including Meissen and Royal Crown Derby) famously imitated the style: typical of this pair of early to mid-19th century French faience vases, decorated in the Imari tase with gilded lion finials, exotic birds, flowers and foliage (see illustration).

In 1853-4, Commodore Matthew Perry (1794-1858) led a diplomatic mission to Japan on behalf of the United States Navy. The threat of gunboat diplomacy, and the advanced firepower of the small American fleet (explosive shells and veiled threats), forced the weak Shogunate to accept a trade deal: opening the ports of Shimoda and Hakodate to American whaling ships, together with the establishment of a US consulate- leading the way to trade with the West. After two years of negotiation, the ports of Edo, Kobe, Nagasaki, Niigata and Yokohoma opened to the Western powers. Trading Houses soon followed.

The West went nuts for Japan, including a renewed interest in Imari. Japanese style, known to the French as ‘Japonisme’- became hugely fashionable in the later 19th century: influencing architecture, clothes, landscape gardening (Monet’s Japanese Bridge at Giverny), operetta (Gilbert & Sullivan’s The Mikado), furniture and the Decorative Arts, especially the Aesthetic Movement. Japanese woodblock prints inspired Western artists, including Degas, Edouard Manet, and James Abbot McNeil Whistler. James Tissot’s Young Ladies Looking at Japanese Objects (1869) says it all. But then, perhaps, the Japanese style has never gone out of fashion. Today, our fascination with the East remains as strong as in previous centuries. 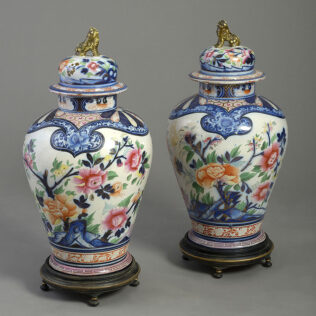 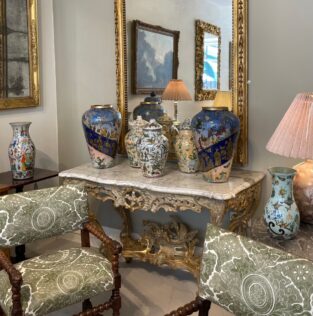