The sitter was the 5th son of John Dudley, Duke of Northumberland (1502-1553). A great favourite of Queen Elizabeth I, he was made both a Knight of the Garter and a Privy Councillor, but failed in his attempts to obtain the Queen’s hand in marriage. He was twice married, first, in 1550, to Amye Robsart, who died in mysterious circumstances, and second, in 1578, to Lettice Knollys, widow of Walter Devereux, Earl of Essex. Despite setbacks with the Queen he ultimately held on to his court position and was given control of the armies at the Battle of the Armarda in 1588 shortly before his death.

The portrait presented here relates to the portrait type of c. 1587, by William Segar, of which the prime version is in a private collection but used to be at Leicester House and then the Lumley Collection c.1590 (for which see E. Goldring Robert Dudley Earl of Leicester and the World of Elizabethan Art, Paul Mellon Yale, 2014, p.11). It was a type that was to be the basic image of the Earl that was used by many different painters at the time and later. The Gresley Baronets were related through marriage to the Duke of Northumberland and Robert Dudley and therefore this version was probably painted to emphasise that historic link; given the nature of the wooden panel used and the manner of the painted finish, it probably dates to the eighteenth century. 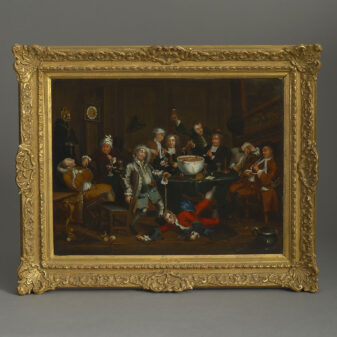