The great English school of satirical caricature founded more or less by Hogarth, attained its full development in the last decades of the 18th Century and the early years of the 19th. Rowlandson and Gilray were its most prominent members, but a number of other artists employed their talents in the same branch of art to some success. Among them was Samuel Collings an occasional genre painter and caricaturist who exhibited regularly at the Royal Academy between 1784 and 1789. His friendship with the great Thomas Rowlandson (1756-1827) has led to his own caricatures being unfairly overlooked and too often ignored, all the more unfortunate as he seems to have concentrated hard in this vein rather than general painting. A great satirical work of the period was The Picturesque Beauties of Boswell which Collings designed and Rowlandson engraved, with some of the original drawings being in the Victoria & Albert Museum. As well as other collaborations with Rowlandson he published caricatures in various popular magazines of the day including Attick Miscellany and The Wits Magazine 1784-5, with some of his other work being engraved by William Blake.

Collings was, however, by no means exclusively a satirist. He painted several portraits and those of George III, Lord Thurlow, and Tom Paine are known to us through the engravings that still exist. This rare self portrait, one of only two known oil paintings by him to have survived, was executed around 1789, and clearly demonstrates the painters skill at rendering character in a manner not too dissimilar to Hogarth. There is a distinct fluidity of brush and a lively approach to the application of paint that perhaps betrays the underlying energy necessary to execute his spirited caricatures. Certainly his other known oil Frost on the Thames, 1789 (Yale Center for British Art, U.S.A.), suggests a keen desire to be personally expressive in the rendition of what could have been a potentially staid genre scene, the figures redolent of Rowlandson. As with this self portrait it is a lively view indebted to, and drawing inspiration from, the caricaturists art. Wittily, on the far right of that canvas stands a figure accepted to be the artist himself and certainly the attire in this present self portrait matches and therefore would bear out this judgement.

The background ownership of this portrait is of particular note having been in one of the greatest collections of British art ever amassed. Paul Mellon (1907-1999), the son of financier and industrialist Andrew W. Mellon, grew up surrounded by paintings from his father’s renowned art collection, which later formed the nucleus of the National Gallery of Art in Washington. A child of enormous wealth, and an English mother, his life was clearly influenced by all things British attending both Yale University in 1929 and Cambridge in England. It was during this time that he developed an appreciation for British art, culture and lifestyle that was never to leave him. From 1959 his collection of British art expanded to become the most important assembled in recent times and quickly became the by-word for excellence in the field. This portrait was acquired in 1961 and initially hanged at the National Gallery in Washington along with the rest of the collection. In 1966 Paul Mellon decided to give the greater part to Yale University together with an endowment for the foundation of a permanent home. The Yale Center for British art was opened in 1977. As the collection grew over-emphasis in certain areas was inevitable and together with space limitations the decision was taken to sell certain selected paintings for the benefit and growth of the collection as a whole. This portrait of Collings was one such painting that was deaccessioned and sold to much acclaim at a special Sothebys Auction in 1981. 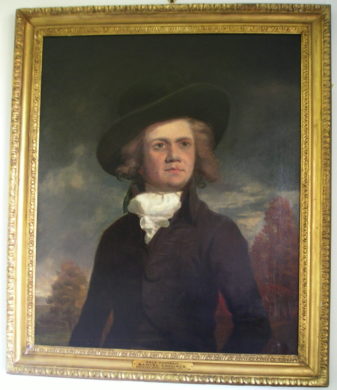