Oil on canvas; held in an ebonsied period style frame

Charles II’s propagandists cast Cromwell as a brutal despot whereas critics now tend to focus on his Puritan fundamentalism. This, apparently, was a dour, austere man – who censored playwrights, disdained culture and showed no interest in the visual arts. Certainly he had no official painter and portraits of Cromwell are few and far between. One of the most famous is by Robert Walker, from 1649, in the National Portrait Gallery: the image clearly inspired by the poses in aristocratic portraits by van Dyck, who had died before the outbreak of Civil War in 1641. Insofar as it existed at all, Cromwellian portraiture, it seems, was merely an extension of portraiture under Charles I.

Peter Lely and miniaturist Samuel Cooper also depicted him, but Cromwell’s attitude to his own image is summed up by his request to “use all your skill to paint my picture truly like me and not flatter me at all. Remark all these ruffness, pimples, warts and everything as you see me”. Cooper duly captured him as such, as did Lely, in sober black armour, without a hint of decoration and with the receding hairline and blotchy cheeks – not to mention warts.  It has been pointed out that plainness had a political purpose, presenting Cromwell as a “sober, honest alternative to the tradition of royal vanity, excess and arrogance he’d just replaced”.

With the Restoration of the monarchy in 1660 such images were scorned and despised. Lely however was recognised as the most outstanding painter of the time and was embraced by the new King as his principal painter. Diana Dethloff states that during the Restoration “Lely dominated court portraiture. Other artists’ work was often judged in the context of his or Van Dyck’s, with many contemporaries regarding Lely as the latter’s natural successor, especially from the way Lely presented himself in his self-portraits, the lavish lifestyle he adopted, and the way he ran his studio.”

For a number of reasons by the mid eighteenth century, a hundred years after the civil war, images of prominent individuals from both the royalist and parliamentarian causes were once more being openly admired and celebrated. The trade in mezzotint portraits alone of both Cromwell and Charles I rose to a high point during this period, with the image by Lely being the most widely circulated of Cromwell. It is probably around this time that the version of the painting presented here was created – a spirited, characterful rendition. 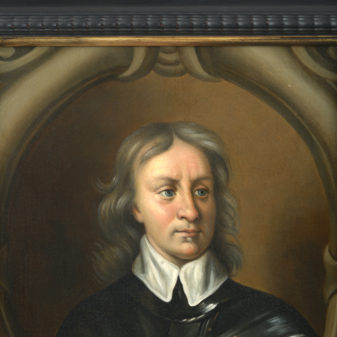 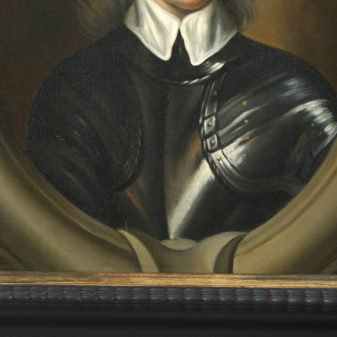