In late 1757 Rear-Admiral Henry Osborn (1694-1771), Admiral of the Blue and Commander-in-Chief, Mediterranean blockaded the neutral port of Cartagena in Spain where a French squadron with troops destined for Louisbourg – then a French fortress on the coast of Nova Scotia – had taken refuge. The Battle of Cartagena took place when a second French squadron of five ships, under Michel-Ange du Quesne de Menneville attempted to raise Osborn’s blockade.

During the melée which ensued on the last day of February 1758, Captain Arthur Gardiner in the 64-gun H.M.S. Monmouth chased the 80-gun Foudroyant, with the Marquis du Quesne on board. Monmouth out-sailed her companions and brought Foudroyant to action, Gardiner telling his crew “This ship must be taken, she appears above our match, but Englishmen are not to mind that, nor will I quit her while this ship can swim, or I have a soul left alive.” The action had lasted two hours when about 9pm in the evening Gardiner was hit through the arm and in the forehead. As he lay dying he told his First Lieutenant, Robert Carkeet, not to give up the ship or quit the enemy.

At one o’clock the next morning another British ship, Swiftsure, caught up with the action and asked whether Foudroyant had struck, and when she was answered by a few shots and small arms fire, Swiftsure poured a broadside into her, whereupon Foudroyant surrendered, having lost her main and mizzen masts, and 100 killed and 90 wounded. Meanwhile Osborn had captured two other French ships in a victory which did much to restore the Royal Navy’s loss of reputation after the defeat of Admiral Byng off Menorca two years earlier.

The principal ships are shown in the moonlit path of the night action. The ‘Foudroyant’, in port-broadside view, is on the left of the picture, her main and mizzen mast gone and still firing at the ‘Monmouth’. The latter, in the centre of the picture, also in port-bow view, and with her mizzen mast gone, is firing her starboard broadside. In the water in the right foreground, is what is probably her mizzen spars, and in the right background the ‘Swiftsure’ and ‘Hampton Court’ are overhauling the combatants.

This is a late eighteenth century version of a larger painting by Richard Paton (1717-1791), exhibited at the Society of Artists in 1762. Another by Francis Swaine is in the Royal Maritime Museum, London. It is unclear which was painted first but it is probably Paton given the engravings which were dated and published afterwards, particularly that by Pierre Charles Canot (1710-1777). The painting presented here is a studio version based on this engraving as the cloud formations, ships sails and masts, and significantly the remnants of the missen mast in the sea in the foreground match almost identically. Paton’s original was offered by Christies in April 1988, and affords us the opportunity to make comparison.

Richard Paton was an English marine painter, born and active in London. His artistic training is uncertain and he was probably self-taught with the help of Admiral Sir Charles Knowles, who gave him a place on his ship where he assisted the ships painter, thus learning about both shipping and painting. He began to exhibit in 1758, first at the Society of Artists in London (until 1770) and later at the Royal Academy (from 1762–80). He showed paintings of naval actions and liked to depict dramatic effects of cannons firing, bombardment and night battles. His paintings were made popular through prints by Pierre Charles Canot and others. 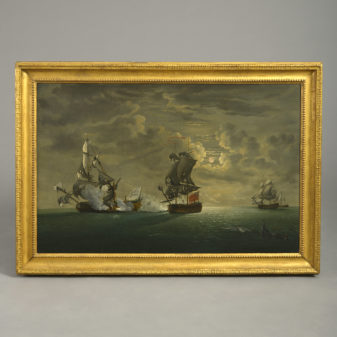 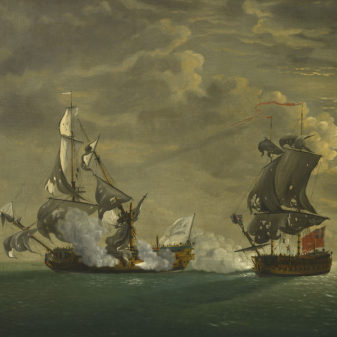 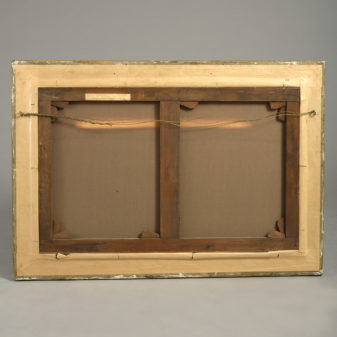 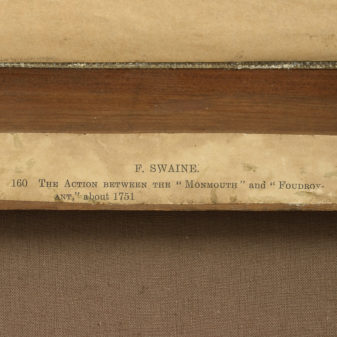 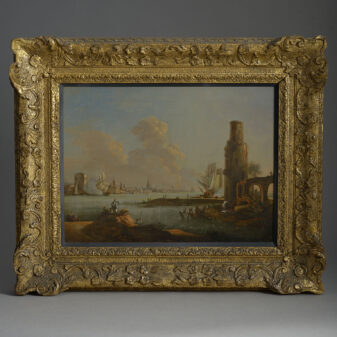 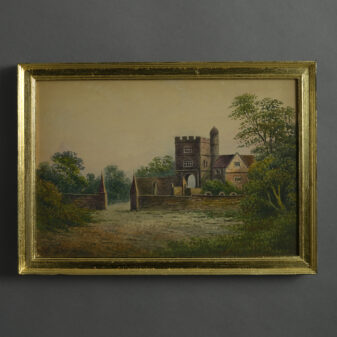 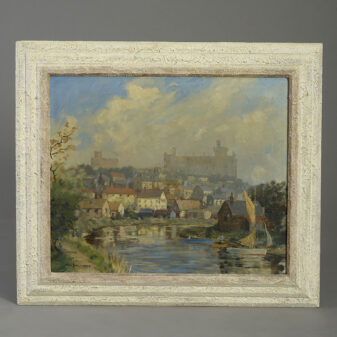 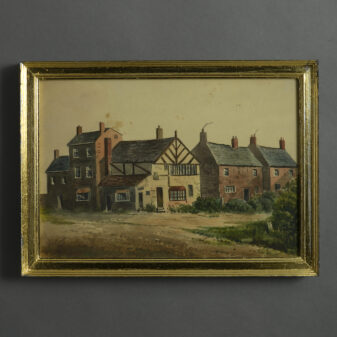