Oil on canvas; held in an early 18th century frame.

Provenance: An English Country House once owned by the Dukes of Leeds

Margaret Godolphin was the youngest daughter of Henrietta, Duchess of Marlbough and Francis, 2nd Earl Godolphin. Henrietta succeeded to the Marlborough title on the death of her father, John Churchill, in 1722 and had four legitimate children. Very little appears to be known of her youngest daughter Margaret and it is variously mentioned that she and a brother Henry died in infancy.

Charles D’Agar was born in Paris, the son of French portrait painter Jacques D’Agar. Soon after moving to London in 1681, Jacques secured an appointment in Copenhagen as Court painter to Christian V resulting in a move for the family to Denmark. Charles, however, after further tuition traveled back to London in 1691 and established a hugely successful portrait practice.

The Marlborough family appear to have been popular patrons of D’Agar as various portraits exist by him, notably one of Henrietta with her eldest son William (Sothebys British Paintings 14th March 1990 lot 45) and another of two Godolphin children (Christie’s Cowdray Park 13-15th September 2011 lot 300). The latter is of particular interest as contrary to the traditional description the portrait clearly depicts Margaret as a very young child swathed in a blue cloak with her eldest brother William standing in the attire of a Roman soldier. The portrait presented here shows Margaret just a few years older than that depiction, elegantly swathed in a blue dress leaning recumbent on a red silk drape amongst a landscape – a setting we see similarly used by D’Agar in other noble portraits and is probably inspired by Godfrey Kneller’s earlier portrait of Annabella, Lady Howard c.1693 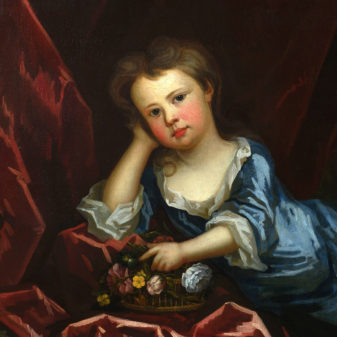 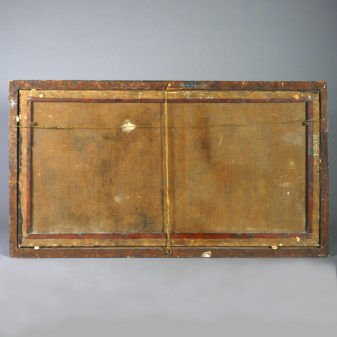