On the wall above where I write is a fine engraving of a tragic politician whom I’m reminded about today, for on this day 208 years ago the first and only British Prime Minister to date was murdered in the House of Commons. Poor Spencer Perceval had been minding his own business and making his way into the Lobby just after 5pm on Monday May 11th 1812 only to walk straight into his assassin who withdrew his gun concealed in his inner coat pocket and shot him dead.

The disgruntled businessman John Bellingham shot him in the chest with the Prime Minister’s last words believed to be ‘I’ve been murdered’. The powers that be wasted no time and within a week he was despatched to the gallows – an event he calmly embraced to such a degree that some thought him mad.

But mad he was not but disgruntled he most certainly was. Apparently Bellingham’s assassination of Perceval came after years of trying to get the British government to redress financial losses he’d suffered. Lloyds of London had insured a Russian ship which was claimed to have been sabotaged by Bellingham. He was jailed in 1803 after he tried to leave Russia and eventually returned to Britain in 1809.  Back on home turf he continually petitioned the government to compensate him – which they politely refused to do.

By 1812 he had tried exhaustively and after repeated attempts through the Foreign Office, Privy Council and the Treasury to get what he felt was due he took matters into his own hands.

The murderous event was captured by cartoonists of the day. 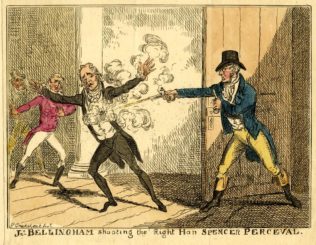 That a businessman could do such a thing after suffering such financial loss might be something that the current incumbent of No.10 might wish to ponder……

George Legge, Viscount Lewisham, 1778 by Pompeo Batoni The Grand Tour was a rite of [...]

I have recently been marvelling once more at the unbelievable quality and perfection of what [...]