Botanical illustration is one of the earliest artistic disciplines. Plant images found in Mesopotamia and Egypt date back nearly 4,000 years. Today, botanists use illustrations as a universal language: a marriage of scientific accuracy and artistic sensibility. 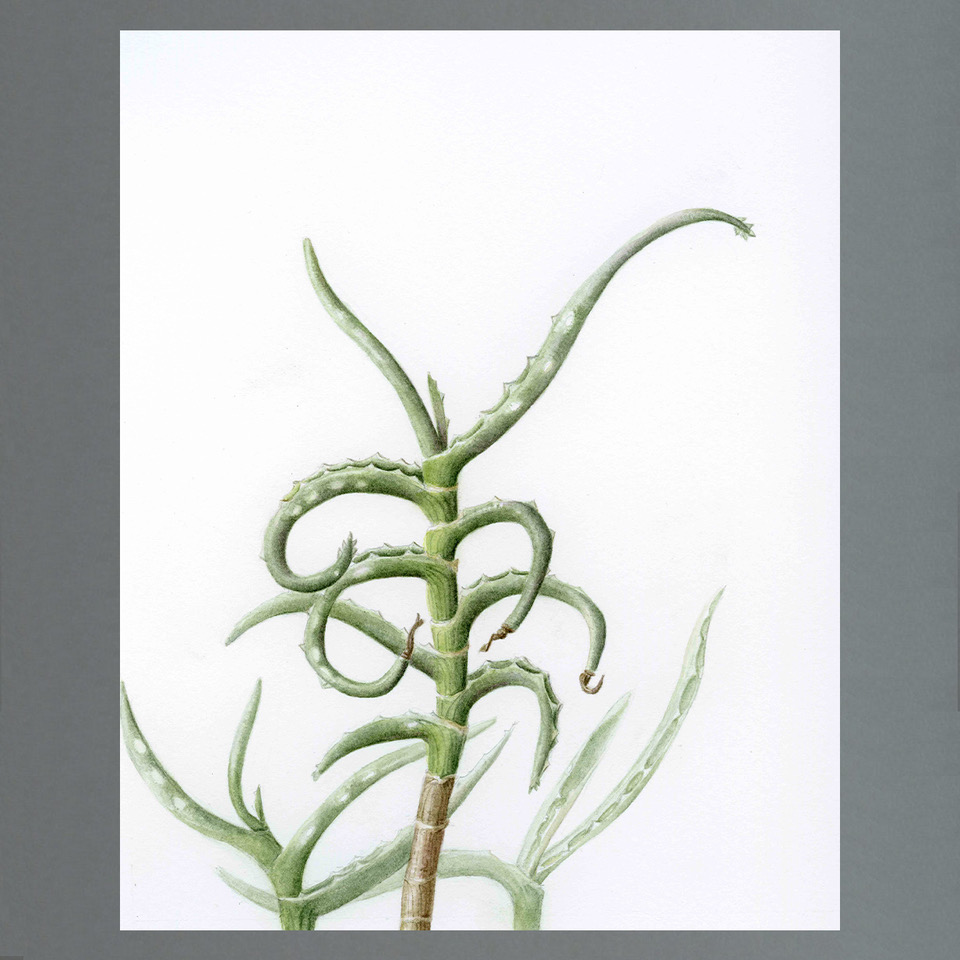 Work is typically painted in watercolour or gouache (or drawn in graphite) to record the form, colour and delicate structure of a plant. Botanical illustration- to be effective- needs to explain the subject to a species- or at the very least- a genus level: a vital clarification.

Helen Bales’ painting (pictured above) shows the beauty and simplicity of an aloe specimen, a sub-tropical, cactus-like plant that thrives in dry, desert-like conditions around the world. Helen is a newcomer to the botanical illustration scene having completed her diploma at the Chelsea School of Botanical Art last autumn, graduating with distinction. In other life, she is an adept interiors stylist, bringing her eye for detail – and design – to her paintings. 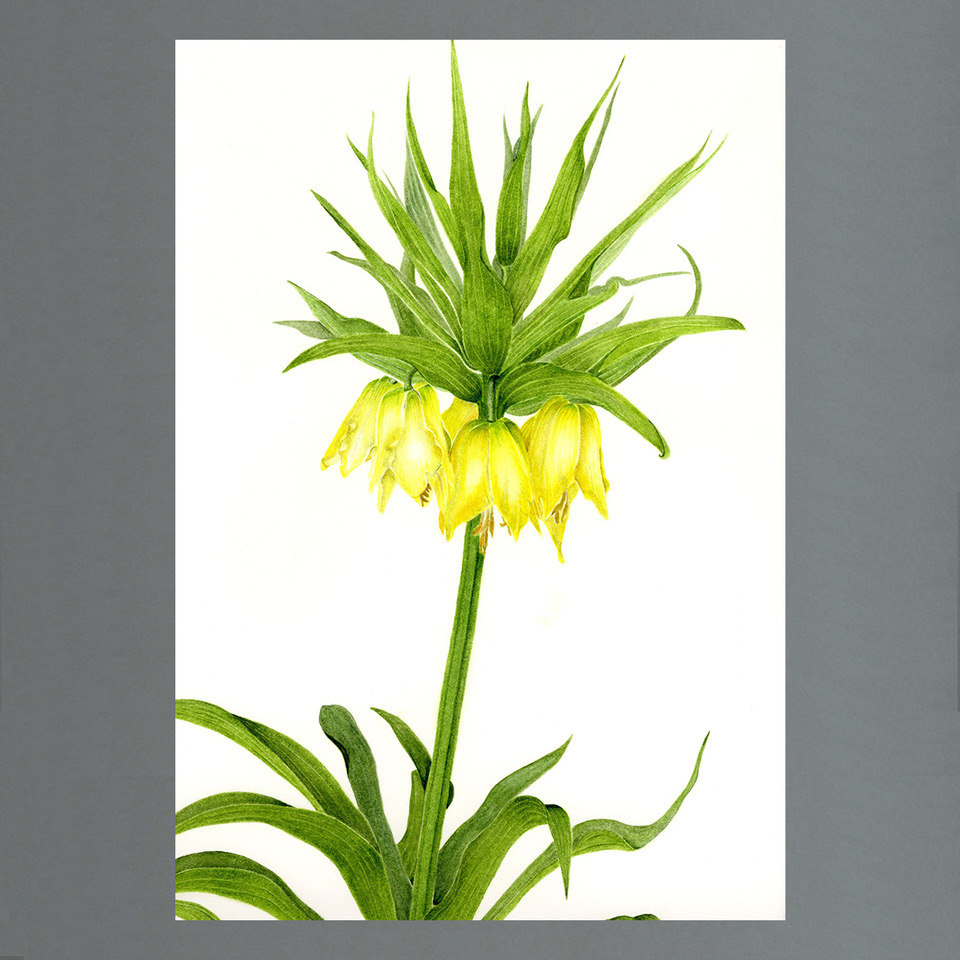 Fiona Kane’s illustration (above) shows the Fritillaria lily in all its architectural splendour; a magnificent specimen. The handsome structure of the Crown Imperial lily has been a favourite of botanical illustrators throughout history. First described in the 16th century- and mentioned in Shakespeare- they are one of the first flowers to bloom in spring. 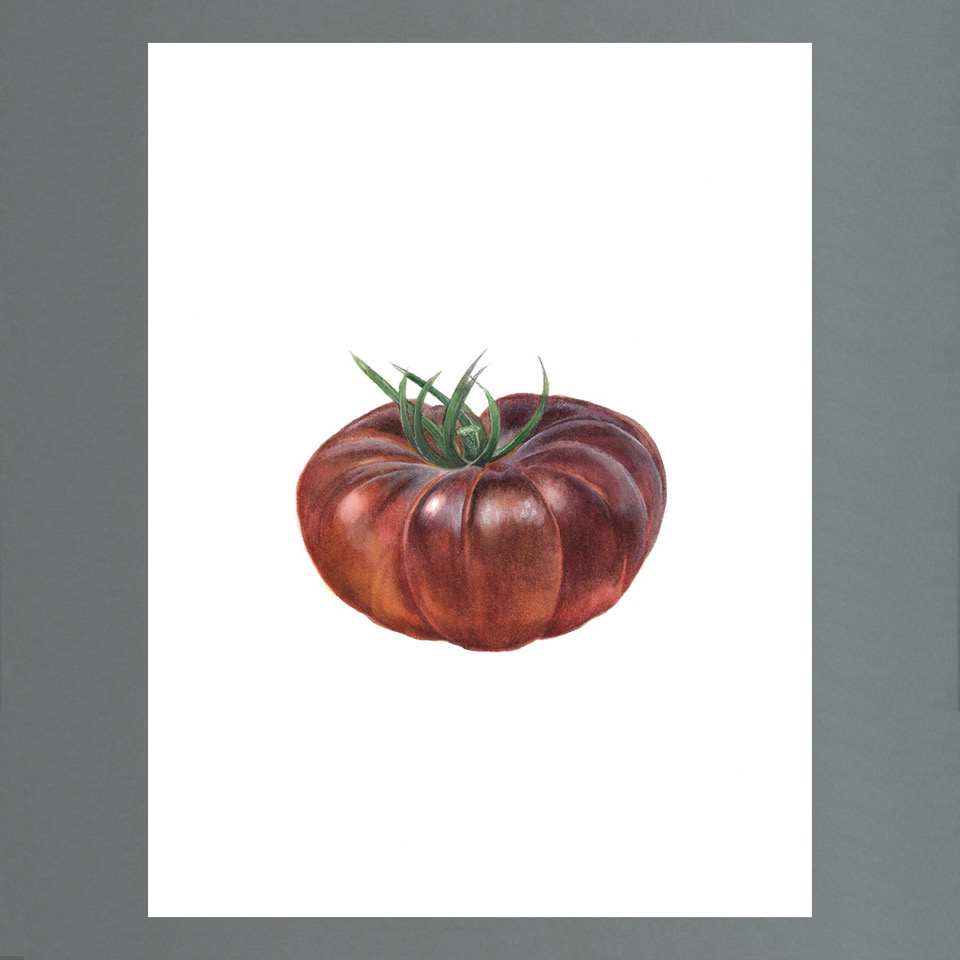 The Mar Azur tomato – a new variety obtained by natural techniques, has a simplicity of form. Emma van Klaveren’s painting (above) records that precision. The tomato’s colour – a rich brown, red and blue- is caused by a high concentration of anthocyanins, a natural plant pigment with significant health benefits. 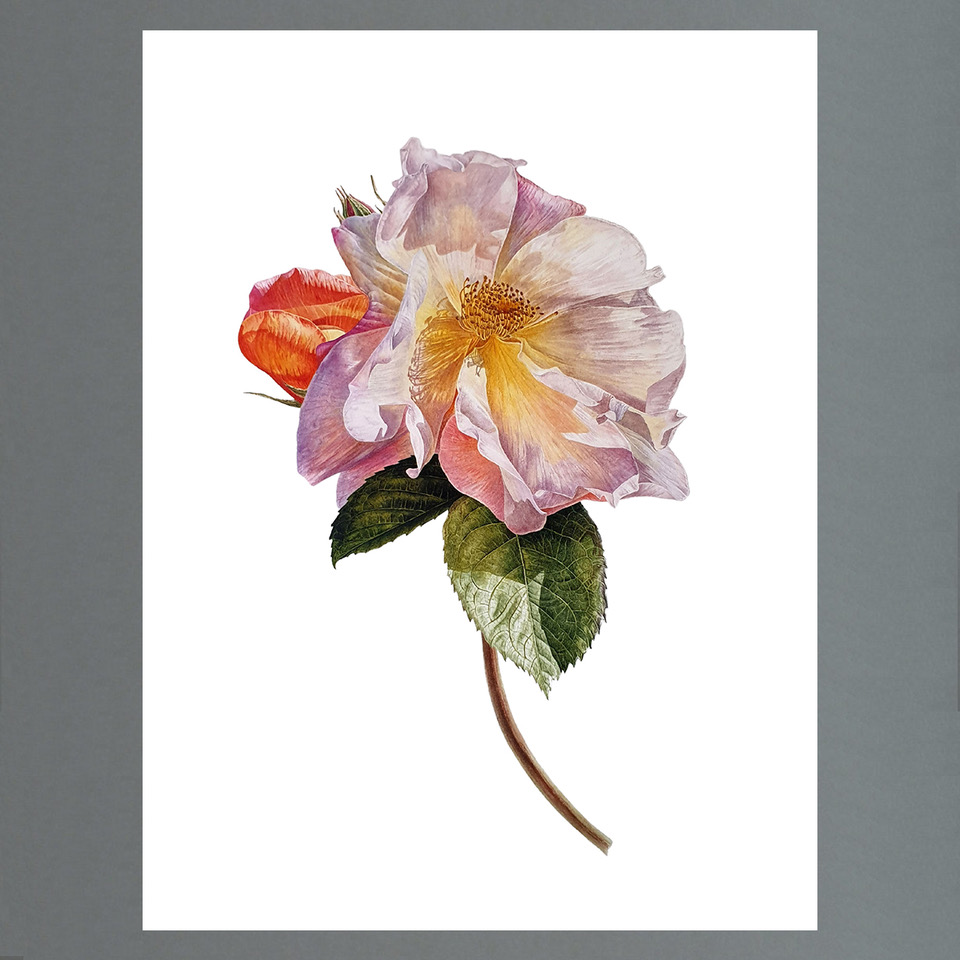 Before the development of photography in the 19th century, botanical illustration was the only way to record plant life visually. Today’s botanical illustrators follow in the distinguished footsteps of earlier female artists: the scientist and adventurer Maria Sibylla Merian (1647-1717); the Bavarian painter and engraver Barbara Regina Dietzsch (1706-83) and Victorian biologist Marianne North (1830-1890), recognised by Kew as the only female artist in Britain to have a permanent solo exhibition on view.

Jarnie Godwin received a formal training in architecture, and has been a teacher and graphic designer. Her work combines structure and detail, with precision and realism, combining an enthusiasm for vivid colour and accuracy, capturing the delicacy – and sometimes imperfection – of flowers and plants. 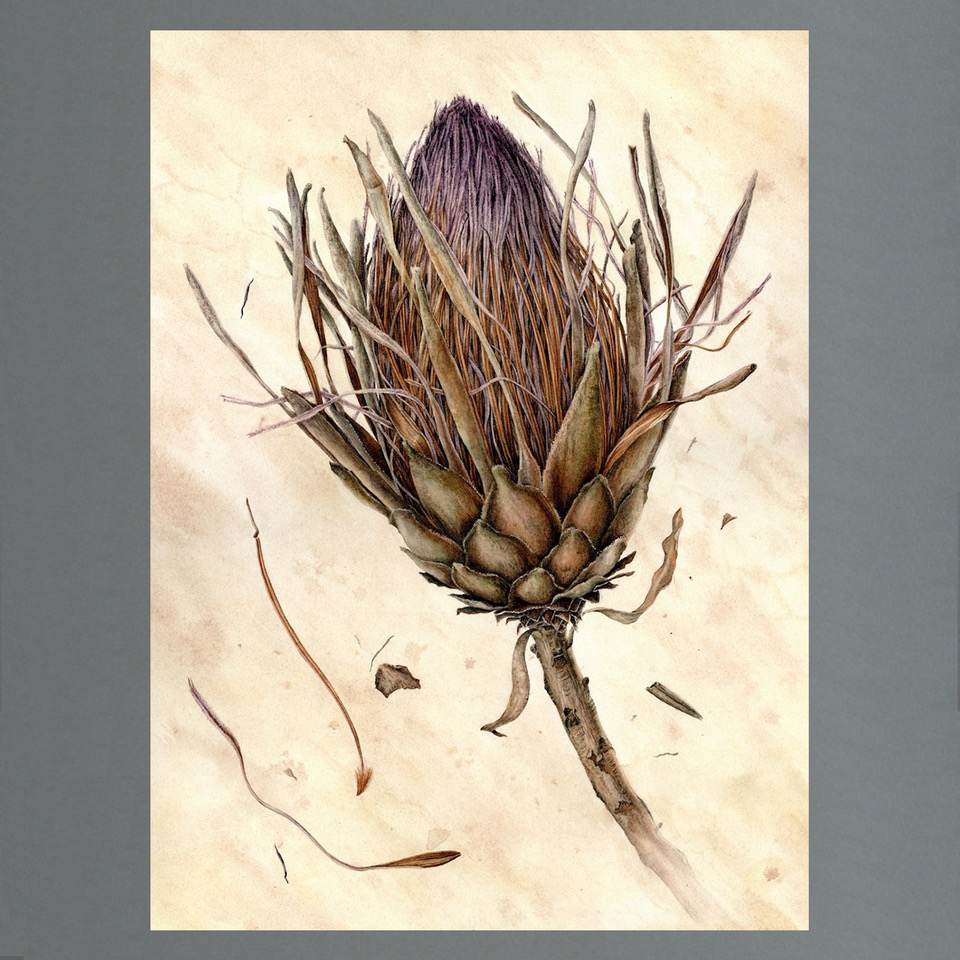 As with Jarnie Godwin, Julia Trickey is drawn to specimens that are less than perfect, especially autumnal leaves, seed heads and fading flowers, often painting them much larger than in life. Julia is an outstanding award-winning botanical artist whose glowing watercolours depict the beauty and detail of nature. She has been awarded four RHS gold medals, and in 2014 the Royal Mail commissioned Julia to illustrate sixteen stamps, issued in three sets under the title British Flora.

Protea (above) is a genus of South African flowering plants, first named by the Swedish botanist Carl Linneaus in 1735. 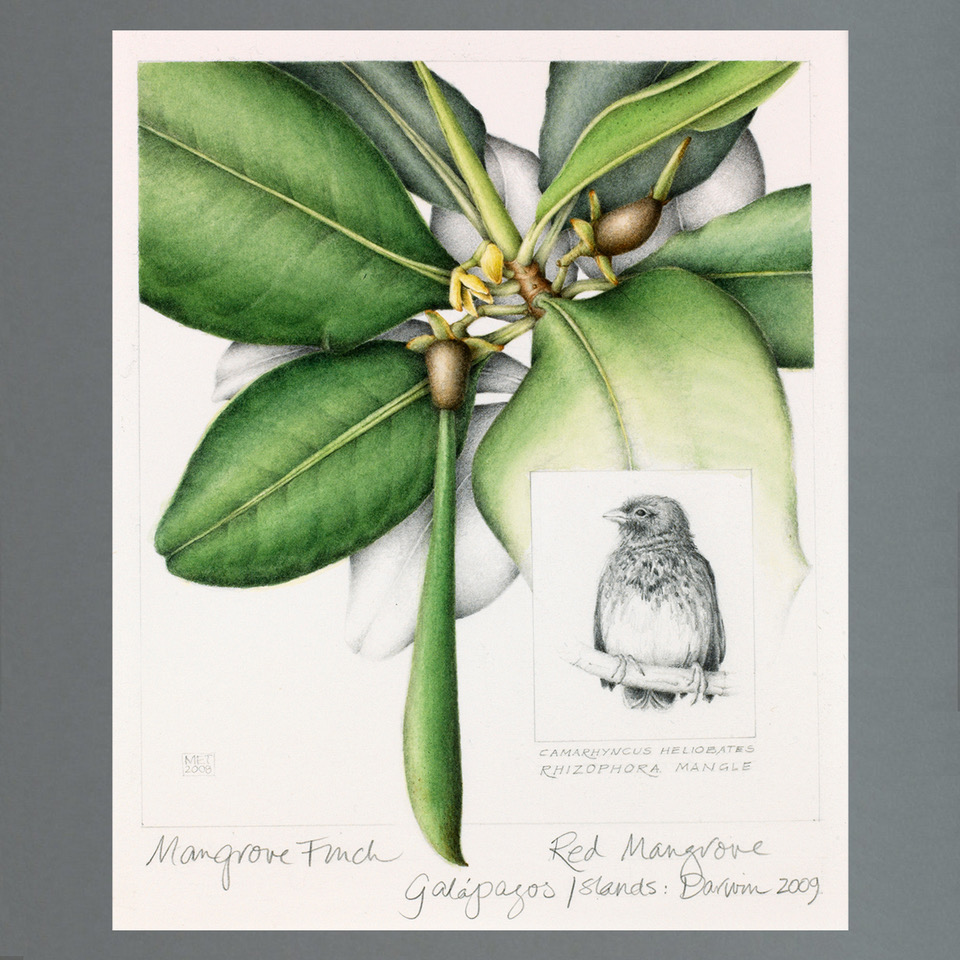 The Mangrove Finch is the most endangered bird in the Galapagos with a mere hundred or so birds surviving. It has specific habitat requirements with breeding populations only occurring in two small areas of mangrove forest, and is one of the rarest birds in the world. 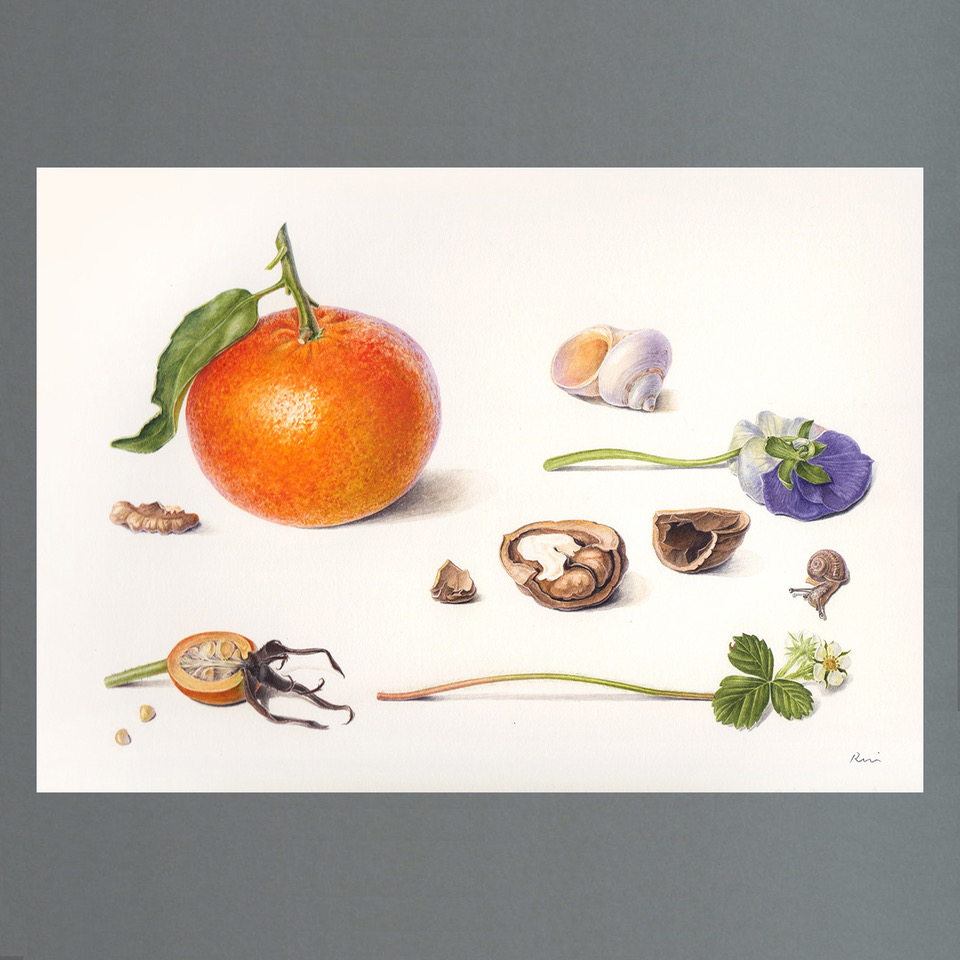 Rui Jiang was born in Shandong Province in China and came to the United Kingdom in 2004. In 2017 she graduated from The Chelsea School of Botanical Art with distinction in her final project, and recent work includes a collaboration with fashion label, Karen Millen. Rui’s illustration, November (pictured above), is painted with beautiful precision, the apple’s skin and texture recorded in autumnal shades of red and orange. 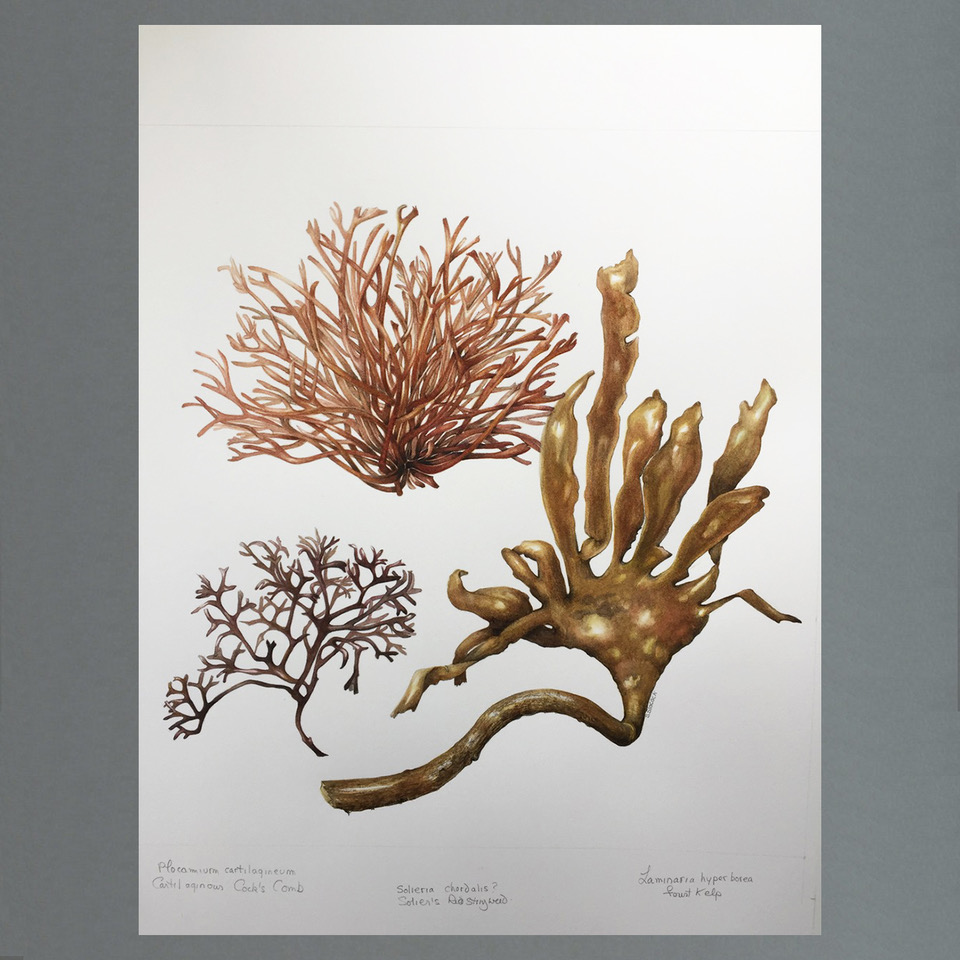 Shirley Slocock comes from a family of famous Surrey nurserymen and has exhibited widely in the United Kingdom, Australia and the United States.

In her fascinating maritime study she captures the delicate branching fronds of the Plocamium cartilagineum – a seaweed found commonly on the shores, and in the shallow rock pools of the British Isles. 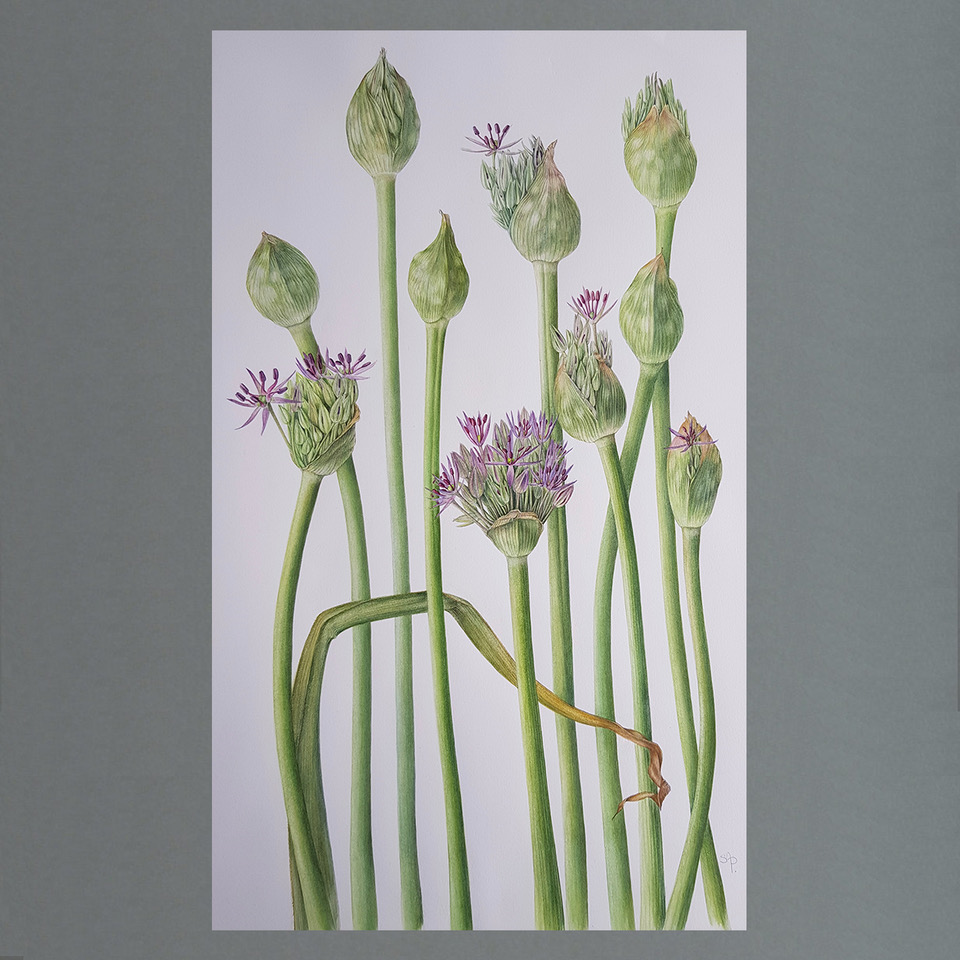 Inspired by her love of nature, Sally Pond is another relatively recent newcomer to the botanical illustration community. She is a regular exhibitor at the RHS Botanical Art Exhibition and runs botanical painting workshops in Salisbury and Beaconsfield: a champion of this dynamic and vibrant art form. With the renewed interest in ecology and the environment, botanical illustration is enjoying a modern, 21stcentury resurgence: as from the days of the Ancient World, it is both a reflection of our civilisation and a record of our evolution. And long may that continue to flourish. Floreat!

Luke Honey is a writer and columnist for Homes & Antiques magazine. He is a former auction specialist and Arts & Antiques Chartered Surveyor. Instagram: @luke_honey 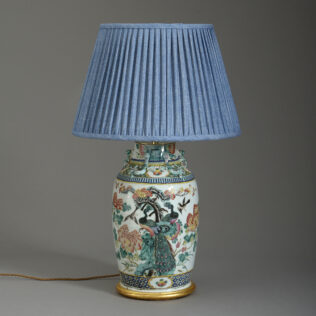