A beautiful and comfortable home has never been more important, with art being the perfect way to decorate and embellish ones walls. In particular, landscape paintings offer escapism and inspiration at times when travelling and going on holiday isn’t always possible.

Landscape paintings are the depiction of natural scenery in art and may capture mountains, valleys, bodies of water, fields, forests and coasts and may or may not include man-made structures as well as people. Although paintings from the earliest ancient and classical periods included natural scenic elements, landscape as an independent genre did not emerge in the Western tradition until the Renaissance in the sixteenth century.  Though landscape painting was still not a genre in its own right and was considered low in the art academy’s rigid hierarchy of subject matter, background landscapes became increasingly detailed in compositions that emerged in Venice in the late fifteenth century.

The seventeenth century ushered in the classical, or ideal, landscape, which set scenes in the mythic and idyllic arcadia of Ancient Greece. The centre of landscape painting during the eighteenth century Rococo Period shifted from Italy and the Netherlands to England and France.

The English Rococo landscape tradition was led by Richard Wilson, who painted in Italy as well as in his native England. His best-known painting, Snowdon from Llyn Nantlle, circa 1765, which shows a group of three people fishing at a lake framed by mountains, exemplifies his serene style. Other English landscape painters of note include Thomas Girtin, John Robert Cozens, and Thomas Gainsborough. 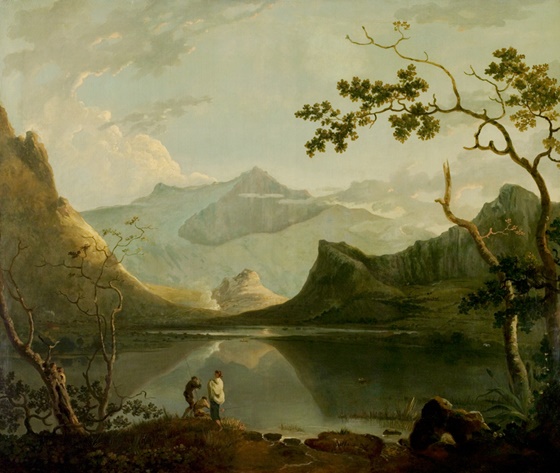 Landscape artists of the 19th century embraced the wide-reaching Romantic movement and infused their compositions with passion and drama. It was in the nineteenth century that landscape painting finally emerged as a respectable genre within the art academies of Europe. In England two of the foremost landscape painters were John Constable and J.M.W. Turner. Both artists worked on a grand scale to express the power of nature.

Alexander Nasmyth (1758-1840) helped formulate the tradition of Scottish landscape painting, which focused in the mid-nineteenth century on the Highlands. He produced work in a large range of forms, including his portrait of Romantic poet Robert Burns, which depicts him against a dramatic Scottish background, but he is chiefly remembered for his landscapes and is described in the Oxford Dictionary of Art as “the founder of the Scottish landscape tradition”. 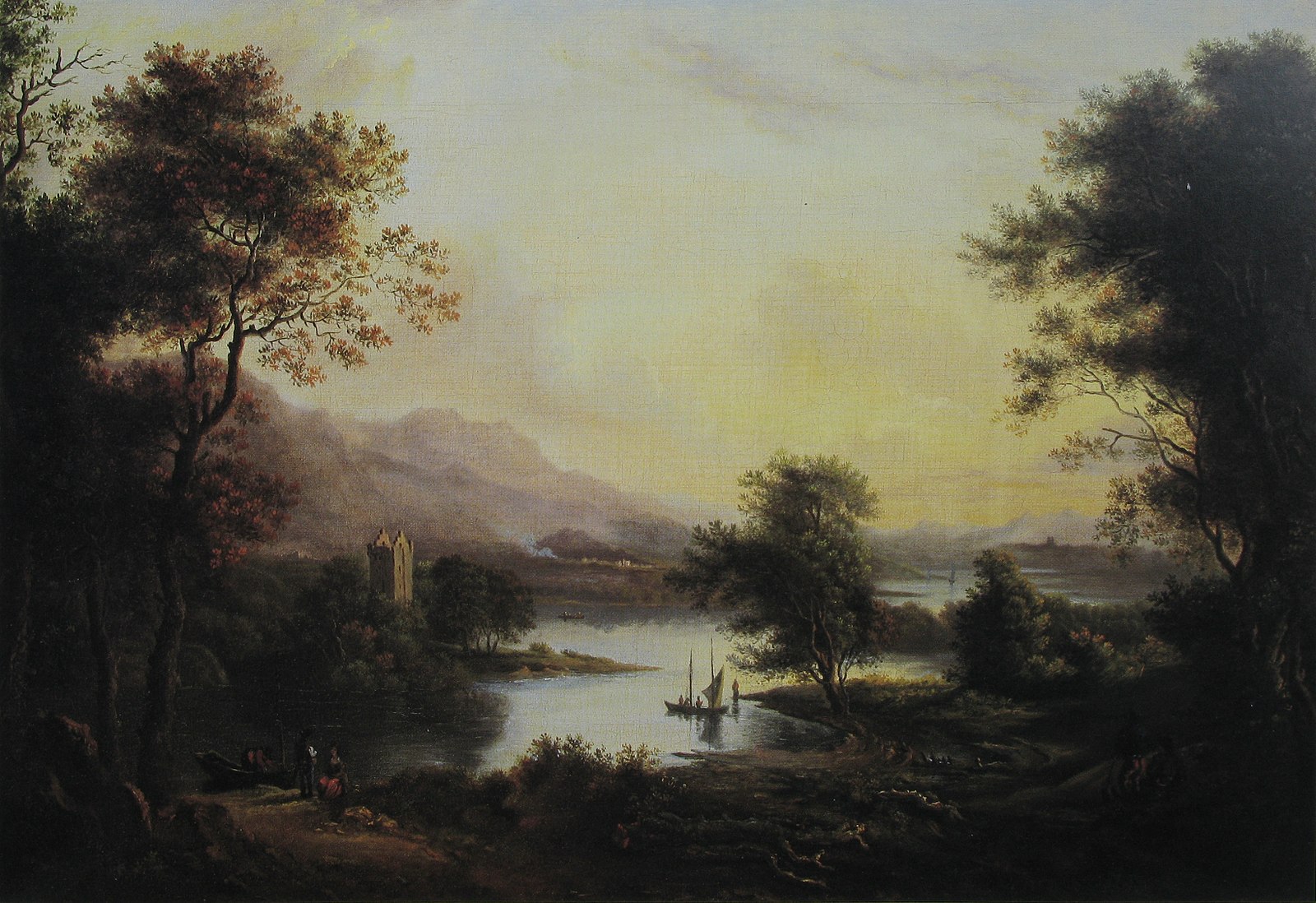 Timothy Langston Fine Art & Antiques currently has a pair of landscapes, in the manner of Alexander Nasmyth, that depict a similar Scottish scenery, with a grand lake in the centre, flanked by hills and trees, and a castle or ruin seen in the background.  Almost half the upper picture plane is taken over by a moody sky.  There is a lonely figure of a man fishing as well as some figures visible in the distance in boats in one painting, and two fishermen in a boat in the second painting.  The smoking chimneys of buildings set in the background suggests a welcoming home, just across the lake.  Although not signed, this pair of landscapes are of very fine quality and offer great views of the atmospheric scenery of the Scottish Highlands. 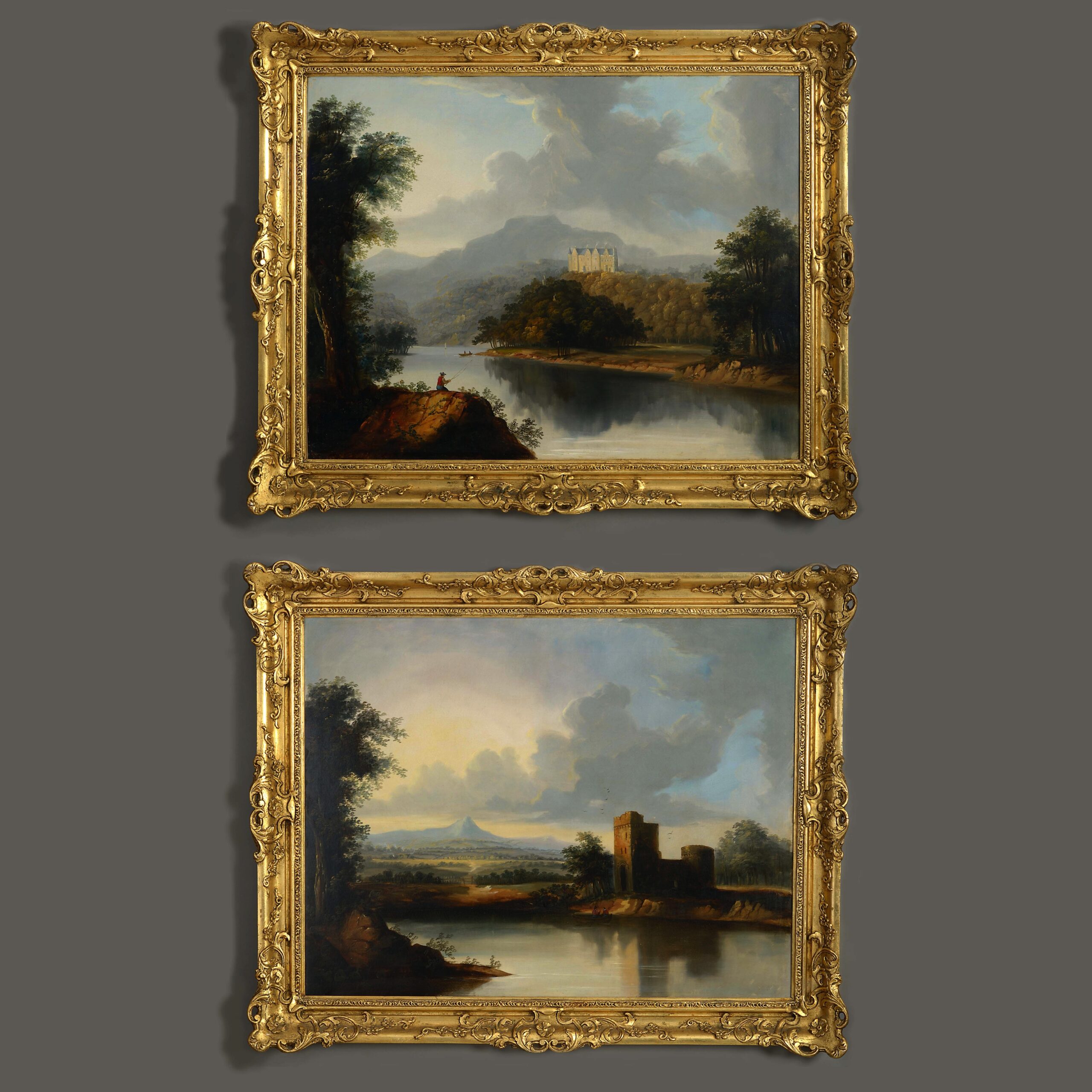 You cannot fail to be moved by the magical and poetic depiction of the Scottish Highlands, with Robert Burns’ poem “My Heart’s in the Highlands” springing to mind: Wherever I wander, wherever I rove, The hills of the Highlands forever I love.”  It is in challenging times that we all long for beauty and harmony, and what better way to achieve this is there than with carefully chosen pieces of art and antiques.