War Ships Off The Coast of Dover. Circa 1860

This impressive work by the Ramsgate based painter William Broome displays his typical knowledge and understanding of the ways of the sea. The principal vessel commanding the central focus of the composition is a 50-gun ship of the line, majestically cutting through the waves in a diagonal path. It appears to be summertime with a relatively calm sea, troubled only by an occasional stiff breeze. These deft touches gracefully animate the arrangement which could so easily, in a lesser hand, appear stiff and static. Broome brings a grandeur to the subject with a fine balance of colour, particularly in rendering the shadowy depth of the sea in blue-green tones.

Aside from the obvious artistic merit it portrays the scene is one, almost certainly, based on real observation. Broome was a stickler for realism and around the time this was painted, Kent as a county shared in a massive new national scheme of defence construction. This was a reaction to a perceived challenge from France by Napoleon III. Reinforcing a British programme to build a new ironclad fleet the coastal defences were modernised and at Dover new batteries were built on the Castle cliffs. Regular patrols of war ships strengthened the defences further as the Royal Navy maintained a rigorous presence to ward off the potential enemy. Broome living at Ramsgate, just further along the coast would have been witness to this naval activity and was clearly inspired to document it in a dignified manner.

This painting was once owned by Capt. Denys Brook-Hart (1916-1982), a leading specialist in marine paintings of the nineteenth century. In the 1970s and early 1980s he did much to broaden our knowledge of the work of William Broome and raise the status of the artist, discovering a number of his works in obscurity and re-establishing his reputation as a serious painter of maritime pictures. 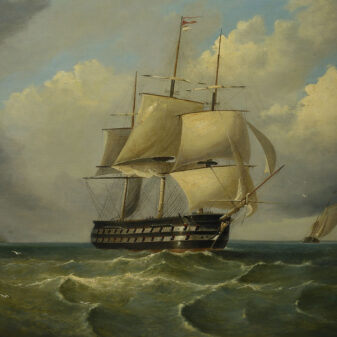 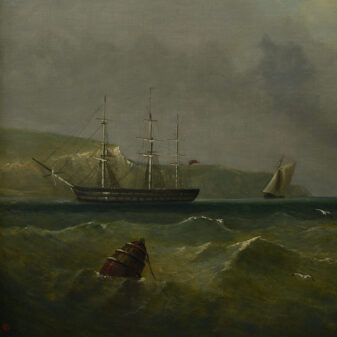