Oil on canvas; signed and dated 1761 and inscribed; held in a period giltwood frame

Robert Monypenny was the son of Captain James Monypenny and Mary Gybbon who were married in May 1714. James Monypenny was the nineteenth generation of the family and had a successful naval career with the resulting prize money forming the basis of his fortune. Due to this, shortly after his marriage he was able to purchase the ancient Maytham Estate in Kent and commence the building of Maytham Hall in 1714. He died seven years later leaving the majority of the house to be completed by Robert who had the hall finished in the Neo-Classical style, symmetrical constructed with two wings. After a fire in 1893, the house was redesigned by Sir Edwin Lutyens in an early Neo-Georgian manner.

Robert Monypenny married Mary Dent in June 1757 at St.Martin’s-in-the-Fields, London. They had no children so the family estates passed to his brother James on his death in 1772. The ancestral seat was Pitmilly House in Fife, Scotland which was to remain with the family until the twentieth century; the advancement of the family in England also resulted in property in London and the country seat of Maytham. Robert appears to have been a conscientious man and his will completed in 1769 is both thorough and generous. This fine portrait, and that of his wife, by Hudson are specifically mentioned, and have remained in the family until very recently.

The legend surrounding the origins of the family name are that Malcolm III Cænnmor, King of Scotland, being obliged to flee after his father Duncan the Gracious was killed by Macbeth in 1040, found refuge with a wealthy French merchant named James Dauphin. When the King sought to recover his Kingdom, he asked his friend for a few pennies, whereupon James Dauphin replied, “Not a few pennies but many pennies”. His two sons also fought alongside the monarch on the field of battle and afterwards, in gratitude, the family were gifted the lands of Pitmilly, Fife.

Thomas Hudson was a hugely successful and popular portrait painter of the mid-eighteenth century. He trained under Jonathan Richardson, later marrying his daughter. He had many artistic friends including William Hogarth, Allan Ramsay and Francis Hayman and travelled to France, Holland and Flanders with both Hogarth and Hayman in 1748, and to Italy with the sculptor Louis-Francois Roubilliac in 1752. Having established his own portrait-painting practice in London, he became increasingly fashionable and took in many pupils including Wright of Derby and Joshua Reynolds. He largely retired from painting by the late 1750s particularly with the rise in popularity of the type of portraiture expounded by his one time pupil Reynolds. Therefore this portrait of Robert Monypenny represents a very late commission for him and as such is particularly sensitively painted and proudly signed. 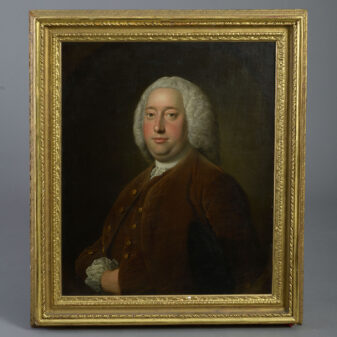 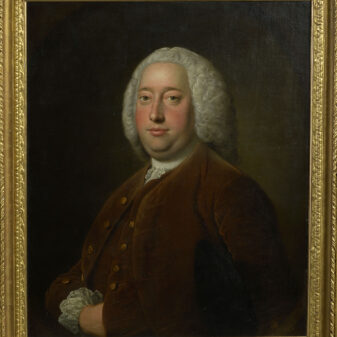