Oil on canvas; held in a period carved and gilded frame.

George III and Allan Ramsay are inextricably linked, as monarch and painter, a relationship as close as Van Dyck and Charles I. Indeed, Ramsay it seems was not immured to the association and was honoured to take up the mantle of principal painter, a position once Van Dyck’s. When George became King their relationship developed in a relaxed, friendly, and courteous manner well beyond what court etiquette of the time demanded and expected.

Ramsay, of course, had already painted George as Prince of Wales in 1758 for John Stuart, 3rd Earl of Bute, the future King’s tutor and mentor. The success of that portrait led to Ramsay painting the State Portrait of George in coronation robes in 1761. The same year the Society for the Encouragement of the Arts offered a premium of 20 guineas for the best drawing of the King in profile, ‘for the purpose of having a die engraved from it’, the prize being given to Jeremiah Meyer.

Ramsay wrote in 1766: ‘I painted, from the life, a whole length picture of him for Hanover, a profile for the coinage, and another whole length which after the Coronation, I, by his Majesties orders dressed in Coronation robes’. Ramsay actually produced two versions of the same profile portrait ‘for the coinage’. The first, showing George in a plain red coat, with the star and ribbon of the Garter and about a year later another with him similarly positioned but wearing a decorative embroidered coat. The portrait presented here is a version of this, painted c.1763.

Unlike the coronation portrait, which numerous versions were produced to satisfy the demands from members of the royal family, sovereigns, heads of state, colonial governors, ambassadors, corporations, institutions and courtiers, this profile portrait is much scarcer. Although widely distributed in print form and engraved by a number of artists, actual oils that have come from Ramsay’s studio, and therefore have the quality and conform to the size and type of the original, are few. There is not even one in the Royal Collection. Alastair Smart in his catalogue of Ramsay’s works published in 1999 lists just four similar to this one, with latterly another at Nottingham University, and now this sixth version which was discovered recently. The original is in a private collection in Scotland. 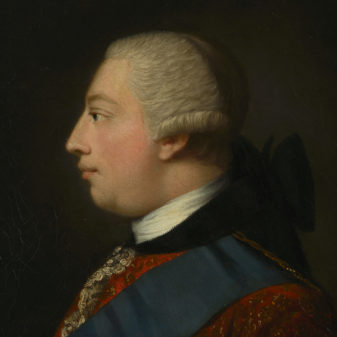 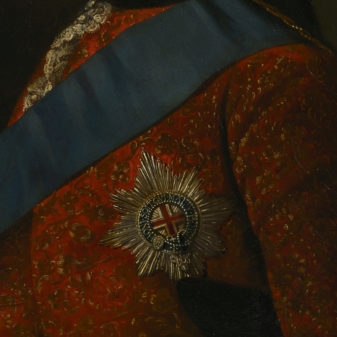 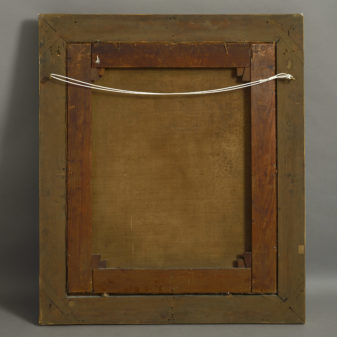