I must pay tribute today, for it is his birthday, to the poet Alexander Pope, born in London on May 21st 1688. His poetical works are not as favoured as they once were which is a shame as they are colourful and full of wit and elegance. Here’s his epitaph to the painter Godfrey Kneller in Westminster Abbey:

Kneller, by Heaven, and not a master, taught,
Whose art was Nature, and whose pictures Thought;
Now for two ages having snatch’d from Fate
Whate’er was beauteous, or whate’er was great,
Lies crown’d with princes’ honours, poets’ lays,
Due to his merit, and brave thirst of praise.

What however is often overlooked is that he was also a talented gardener – a Monty Don of the time if you like.

Moving to Chiswick in the early 18th century he befriended Henrietta Howard who lived at marble hill house. Traditionally acknowledged to be the work of Charles Bridgman there is evidence that Pope was much involved in the garden designs.

At the same time he worked on his own garden having bought five acres adjoining his house for the purpose. Sadly nothing now is left, but the grotto he established is currently undergoing restoration and will be a lasting tribute when completed.

And the designs captured at the time by another gardener John Serle show us just how inventive Pope was. Inspired by classical literature and influenced by painting his garden focused on the principles of light and shade and creating compositions appropriate to the texts written by classical authors such as Homer. The garden included groves, wilderness areas, mounts and statuary, all thought to be key components of ancient gardens. 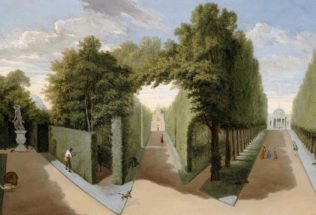 George Legge, Viscount Lewisham, 1778 by Pompeo Batoni The Grand Tour was a rite of [...]

I have recently been marvelling once more at the unbelievable quality and perfection of what [...]