A popular subject for artists, the character of Maria from Laurence Sterne’s book ‘A Sentimental Journey through France and Italy’ caught the imagination of many, including Angelica Kaufman and Joseph Wright of Derby. Catherine Gordon observes that for many painters of the 1770s and 1780s, Sterne was ‘above all the source of Maria – a subject seemingly tailored to fit…the sensibility of the late eighteenth century spectator’ and further notes that twenty paintings of ‘Maria’ were exhibited and/or engraved between 1777 and 1819 (C. Gordon ‘British Paintings of Subjects from the English Novel 1740-1870’). The version presented here was painted by Thomas Gaugain in 1779 and exhibited at the Royal Academy the following year. Similar in composition to Kaufman’s small oil, Gaugain retains the intimacy of melancholy whilst rendering grandeur of scale to the subject, echoing Wright’s earlier version of 1777. Confidently painted with much detail and fluidity of brushwork, this painting is a rare survival of Gaugain’s artistic work before he abandoned painting in favour of lucrative printmaking.

Faithful in detail to Sterne’s narrative we encounter Maria sitting under a tree ‘…with her elbow in her lap, and her head leaning on one side within her hand’. The character Parson Yorick has made a detour in his own travels having been told of her misfortunes by Tristram Shandy in Sterne’s previous book of that name. ‘…a small brook ran at the foot of the tree…she was dress’d in white, and much as my friend described her, except that her hair hung loose…a pale green ribband…fell across her shoulder to the waist; at the end of which hung her pipe’, an instrument on which she played cadences ‘so melancholy, so tender’. She kept a little dog for a companion as she had lost everyone else whom she had loved, ‘tied by a string to her girdle; as I look’d at her dog, she drew him towards her with the string. – ‘Thou shalt not leave me, Sylvio’, said she…’Maria’s pitiable condition has a powerful effect on Yorick: he feels ‘such unbearable emotion’ that he declares ‘I am positive that I have a soul’. ‘A Sentimental Journey’ was to have a similar effect on a large number of Sterne’s readers and the tale became extremely popular and influential.

‘A Sentimental Journey through France and Italy’ was written and first published in 1768 and was inspired by a European tour Sterne had made a few years earlier across France and Italy and down to Naples. After returning to England he was determined to describe his sojourn in a particular way; unlike previous travel accounts which stressed classical learning and objective non-personal points of view, ‘A Sentimental Journey’ emphasized the subjective discussions of personal taste and sentiments, and of manners and morals. The book is arguably less eccentric and more elegant in style than ‘Tristram Shandy’ and was certainly better received by contemporary critics. Published on 27th February, Sterne died just a few weeks later.

It has previously been held that Thomas Gaugain was born at Abbeville in France and settled in London as a young man. However, as Timothy Clayton suggests (Oxford Dictionary of National Biography, 2004), it seems much more likely that he was the son of Philippe Jean Gaugain and Mary Anne, née Malherbe, who married at St Dunstan, Stepney in 1753. Thomas entered the Royal Academy Schools in 1771, when his date of birth was given as 24 March 1756. He worked initially as a painter, exhibiting portraits and literary genre at the Royal Academy, 1778-82. Together with his brother, Peter John (1762-1813), he went on to run a very successful engraving and printselling business in Soho working closely with James Northcote, William Redmore Bigg and George Morland. He married Mariane Ame Le Cointe on 17 June 1787. 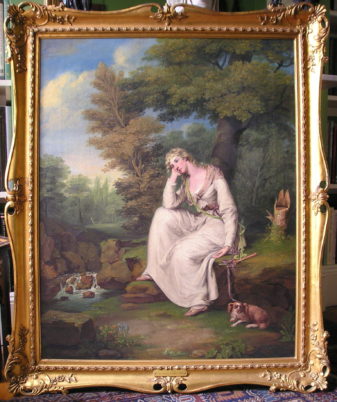