Hebe and Ganymede circa1800

A pair of pastels on paper; held in ebonised frames

The German artist, Johann Heinrich Schröder was born in Meining in 1757 and studied at the Academy of Painting and Sculpture in Kassel under Johann Heinrich-Tischbein (1722-1789).  He undertook study tours to England and the Netherlands where he portrayed members of the royal families and on his return to Germany was quickly employed by various courts, becoming the favoured royal portraitist of the Duke of Brunswick. He worked mainly in pastels – producing lively, colourful images – and was the best German artist of his time using this technique. Though not typical for the artist, these mythological figurative works exhibit very similar qualities that make it likely that they are by him, or at the very least, an extremely talented colleague working closely in his circle.

Many slightly different versions of the classical myth exist but in essence the pastels simply depict both Hebe and Ganymede as cup-bearers to the Gods: Hebe, the daughter of Juno, and goddess of youth, vacated this position on becoming the wife of Hercules or possibly was dismissed as a consequence of a fall she met with when in attendance on the gods. Her successor was Ganymede, a Trojan boy, whom Jupiter, in the disguise of an eagle, seized and carried off from the midst of his play-fellows on Mount Ida, bore up to heaven, and installed in the vacant place. The poet Shelley in “Prometheus” writes that Jupiter calls to his cup-bearer thus: “Pour forth heaven’s wine, Idaean Ganymede, And let it fill the Daedal cups like fire.” 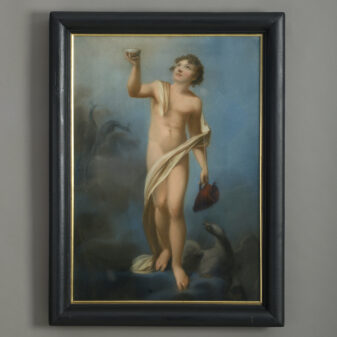 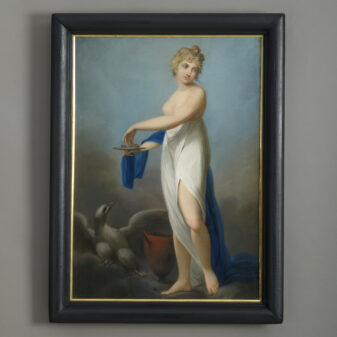