This fine19th century pastel portrait of the philosopher Rousseau is directly drawn from the original by La Tour now in the Musee Antoine Lecuyer, Saint Quentin, France.  As the art historian and pastel specialist Neil Jeffares observes, “a good many repetitions of La Tour’s works were made in his lifetime: some are evidently autograph…Others may be contemporary copies by unrelated artists. A substantial proportion however were probably made by pupils working under his guidance…unlike most pastellists La Tour evidently has a substantial studio and the practices and names of those involved have yet to be fully uncovered.” Certainly the skilful observation and the apparent spontaneity mark this out as an accomplished work and by an artist well aware of the techniques of La Tour.

Finished pastels emerged as a format for portraiture in France in the late 17th century and by the middle of the 18th century Maurice-Quentin de La Tour was among the most celebrated and accomplished portraitists in the medium. His considerable success led to commissions from the royal family, the court, the rich bourgeoisie and from literary, artistic and theatrical circles. Given this popularity and that of the Philosopher Rousseau it is unsurprising that a keen follower of La Tour’s work created this striking version of the famous portrait, capturing as it does, the nuances of character that make it one of La Tour’s finest images.

One of the most influential thinkers of the modern age, Rousseau’s writing was linked to many of the vogues that marked late eighteenth-century intellectual life, including the belief in the redemptive force of nature, the idealisation of childhood, and the freedom and equality of mankind. Many of his political theories were incorporated into the tenets of the French Revolution and he was idolised by later advocates of Romantic naturalism 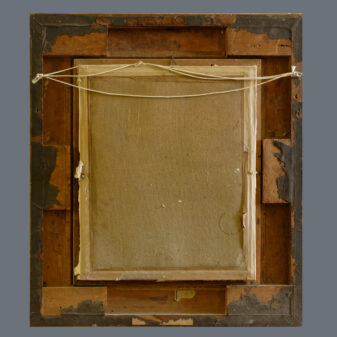