Margaret ‘Peg’ Woffington, was born in Dublin around 1714. Her charm and beauty as a child attracted much attention quickly resulting in her first stage role at the precocious age of 10. Her first important appearance was as Ophelia in 1737 in Dublin, followed by her greatest role, the male part of Sir Harry Windair in Farquhar’s Constant Couple, which in 1740 led to her engagement by John Rich for Covent Garden, London. She was soon to become David Garrick’s leading lady in London and Dublin from 174248 and her attachment to the leading stage actor and impresario was the most publicized of her numerous affairs. Ill health compelled her to retire in 1757, never to act again.

This previously unrecorded portrait study c.1745 depicts the actress in that of a regal role, with an ermine stole and pink robe, swathed around a thick white silk dress. She is possibly depicted as Queen Katherine from Shakespeare’s ‘Henry VIII’ a play she is known to have starred in around the time of this portrait. Previously thought to depict the actress Catherine ‘Kitty’ Clive, a stage rival of Woffington, her portrait by Jeremiah Davison was originally with Horace Walpole and is now in the collection at Longleat. Fortunately the broad iconography now available of both actresses enables correct identification, however it is easy to see why confusion once existed; both were important actresses of the day; both Irish born; both keen rivals; both having been mistresses of David Garrick; there lives following very similar paths.

Jeremiah Davison was born in London of Scottish parents. He worked in London as a portrait painter and under the guidance of Joseph Van Aken he acquired considerable skill at the depiction of silks and fancy clothing material. In 1736 the Duke of Atholl encouraged him to settle in Edinburgh, where he established a successful practice for several years before returning to London. He died in Leicester Fields (Square) in 1745. 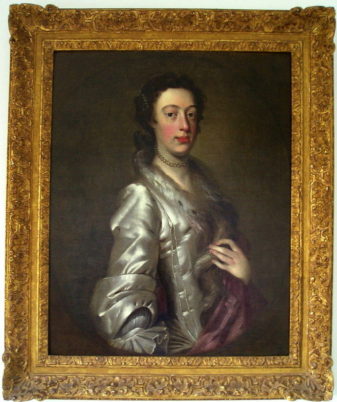