Oil on canvas; held in a carved giltwood frame.

Henry Pelham’s tenure as First Lord of the Treasury (Prime Minister) continued the direction and style of politics inaugurated by his mentor, Sir Robert Walpole. Pelham was the second surviving son of Thomas Pelham, first Baron Pelham of Laughton, and his second wife Lady Grace Holles. Born in September 1694, Pelham was educated at Westminster School and Hart Hall (Hertford College), Oxford. His father’s death in 1712 brought him cash and land in the family’s home county of Sussex. The Pelham family had traditionally been Whigs and both Henry and his elder brother, Thomas Pelham-Holles, Duke of Newcastle, maintained this allegiance.

Pelham’s rise to power was steady and sure and no doubt helped significantly by his brother’s power and influence. In 1724 he became Secretary at War and in 1730, Paymaster General. During the 1730s Pelham’s political influence developed, though largely outside the public eye. By 1742 he had become Leader of the House of Commons, and a year later Prime Minister and Chancellor of the Exchequer. With his brother in the House of Lords, the two brothers controlled a vast web of political influence and patronage and were the dominant forces in British politics during much of the reign of George II.

During his time in power, Pelham was faced with major national and international events, including the Jacobite Rising in 1745 and the War of the Austrian Succession and subsequent Treat of Aix la Chapelle. His main political legacy, however, is considered to be the work he carried out in restructuring the National Debt, which assisted British victory in the Seven Years’ War and which enabled a period of stable government after the upheaval of the 1740s

John Giles Eccardt (1720-1779) was a German artist who moved to England at an early age, possibly with the French portrait painter Jean Baptiste Van Loo. In London, he was assistant to Van Loo, but when his master left Britain in 1742, Eccardt remained and set up a portrait practice. Adopting a style close to his master’s, clients seemed attracted by the continued use of Van Loo’s glamorous look. The portrait presented here is a slightly smaller version of a similar painting in the Parliamentary Art Collection attributed to Eccardt. Probably completed shortly after coming to office as Prime Minister in 1743 it would have been commissioned no doubt for a political supporter of the Whig cause. 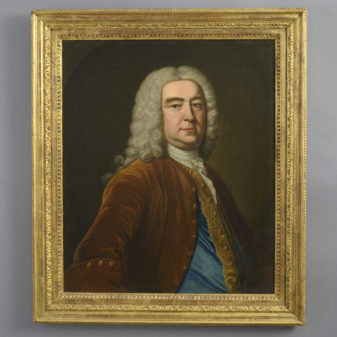 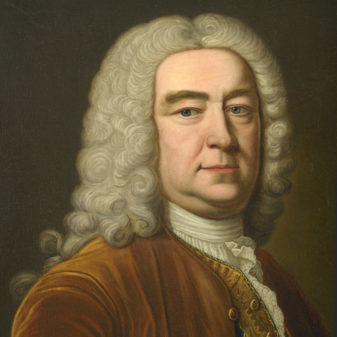 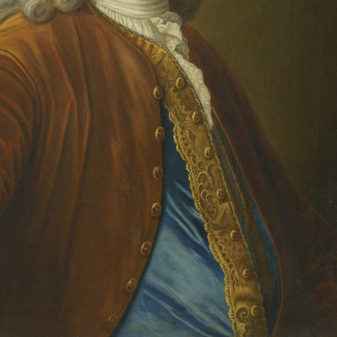